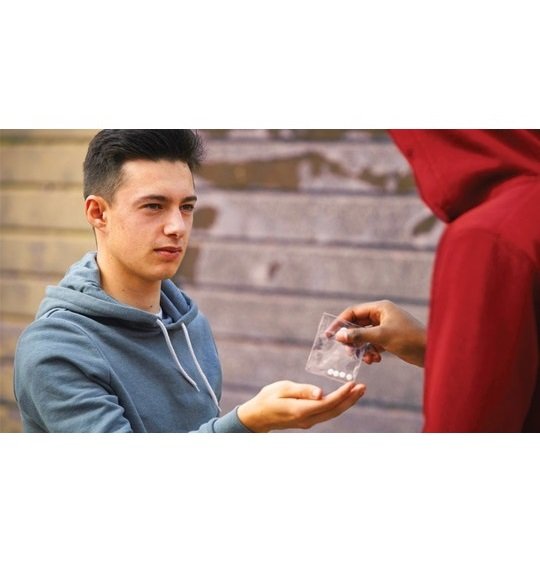 This program arms viewers with the most updated information on fentanyl, an opioid drug responsible for thousands of accidental overdose deaths. The program describes how fentanyl is made in dirty, illegal labs and that drug dealers often mix it with heroin and sell it to whoever is . . .

This program arms viewers with the most updated information on fentanyl, an opioid drug responsible for thousands of accidental overdose deaths. The program describes how fentanyl is made in dirty, illegal labs and that drug dealers often mix it with heroin and sell it to whoever is looking for a cheap high. Viewers will learn that fentanyl is 100 times more powerful than heroin and only a minuscule amount, the equivalent of three grains of salt, can be deadly. The program also alerts viewers to a sister drug, carfentanil, which the Toronto Sun called “the drug of mass destruction,” because it is 100 times more powerful than fentanyl and 10,000 times more powerful than morphine. This program speaks directly to young people in a way they will understand. The video delivers a strong no use message and exposes the hidden dangers of fentanyl-laced heroin and marijuana.

Human Relations Media has once again succeeded in presenting coverage of a timely and significant topic in an extremely accessible manner. There is no doubt about producer/director Scott Sniffen’s perspective for this program—fentanyl and other synthetic opiods are extremely dangerous and often deadly. Coming near the end of the video is an example that drives home the message best: in other Human Relations Media videos about the dangers of addictive drugs, they usually present recovered users to tell their stories. In making this program, users’ stories could only be relayed through the palpable sadness of parents who lost their children to fentanyl and carfentanyl use.

From the opening scenes of clips from television news programs to the chemical reasons for addiction to parental testimonies, this program provides a succinct and captivating overview of fentanyl. It reviews the differences between opiates, semi-synthetic opioids and synthetic opioid analgesics. The simple animations of what happens to the brain are clear and effective. The reasons for fentanyl entering the street drug trade are expounded as well as the ease with which it can be laced into other drugs such as heroin and marijuana, unbeknownst to users. The deadly properties of fentanyl and carfentanyl are explained, along with probably the deadliest reason—that first euphoric high that users are chasing can never be achieved again. Aimed at a middle school through young adult audience, this program is highly recommended for middle school, high school, community college and college library collections.

Gr 9 Up–Fentanyl is the ultimate Pandora’s Box, impossible to detect in a dose of heroin and 30 times more fatal. It’s cheaper to manufacture, so dealers have a strong incentive to add it when packaging doses for street sales. In combination with heroin, fentanyl is responsible for most fatal overdoses in the U.S., and the number continues to rise despite public concern. Most who are troubled by the epidemic are at a loss as to how to stop it. This production addresses the biochemical aspects of how fentanyl works on the brain and how it affects users who are trying to detox. None of the symptoms (cramping, vomiting, severe itching and shaking) are something most would ever want to experience. The young woman who narrates the film talks about how users continue trying to replicate the initial high, a phenomenon called “chasing the dragon.” Sadly, few ever find it again. She also points out how toxic fentanyl is. Law enforcement often resorts to using Hazmat suits when at risk of exposure. Multiple doses of Narcan are often necessary because the drug is so powerful. Users often die before being able to remove a needle. A closing statement vividly sums it up. When filming, the producers tried to find recovering addicts to participate, but all they encountered were grieving survivors. VERDICT A definite add for schools where substance abuse prevention is a priority.

Another entry in Human Relations Media’s opioid-related programs (see The Opioids Epidemic: How I Became a Heroin Addict in VL-1/17 and Opioids: Addiction, Overdose and Death in VL-1/18), this latest title looks at the synthetic painkiller fentanyl. Originally designed as an anesthetic for cancer patients and end-of-life care, fentanyl is many times more dangerous than heroin or morphine (both of which can be derived naturally from opium) and is different from semi-synthetic opioids such as Percocet and Oxycodone in that inexperienced street dealers now cut their regular drugs with fentanyl for profit (since it’s cheaper). Comments from a knowledgeable host, relevant diagrams , and clips from news and law enforcement footage are combined with interviews of affected family members. Also covered is an even more hazardous companion drug called carfentanil (which is used on elephants). The bottom line: fentanyl kills and can be added to common street drugs without the end user’s knowledge. Recommended. Aud: J, H, C, P. (J. Williams-Wood)