Bully Bystanders: You Can Make a Difference

Home » Shop » Bullying » Bully Bystanders: You Can Make a Difference 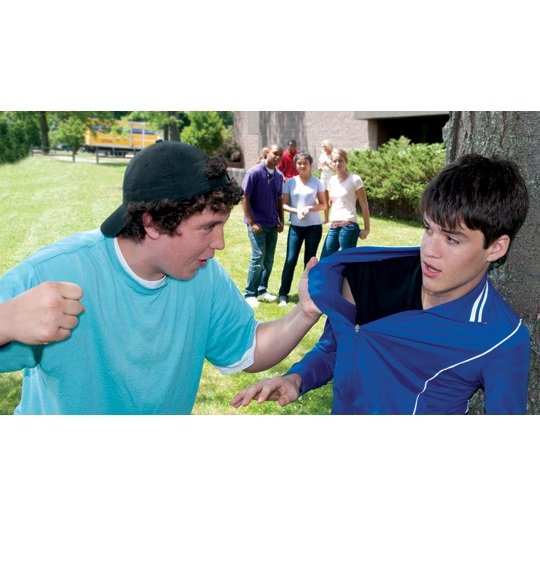 Bully Bystanders: You Can Make a Difference

Most teens don’t like to see their peers bullied but are not sure whether or how to respond. This video offers the empowering message that the most effective way to deal with bullying is through the efforts of those who witness it.

Most teens don’t like to see their peers bullied but are not sure whether or how to respond. This video offers the empowering message that the most effective way to deal with bullying is through the efforts of those who witness it. The program features a compelling short drama based on real-life incidents where bystanders stand up and change the outcome of a bullying incident. We also hear from real teens discussing incidents where they and their peers made a difference by intervening in a bullying situation. On-screen experts advise teens how they can become proactive without putting themselves at risk. Viewers learn that respecting others and taking a united stand against all sorts of harassment is not only possible, but it can make a dramatic difference in the lives of many young people. Bystanders can make a resounding contribution by setting the tone for their peers and refusing to accept hostile behaviors.

Starred Review  It is difficult for students to stand up to someone who is bullying a classmate, but inaction often makes things worse. This program follows Jason, an older teen, whose rule of survival in high school is like most students, “MYOB” (mind your own business). Over time, on the bus ride to school, in the classroom, in the library, and in the cafeteria, Jason watches as a classmate is verbally harassed, excluded, and the target of cyberbullying. When he hears that she has attempted suicide—or bullycide—he imagines how this could have been prevented if he had stepped in. This dramatization of the same scenarios, replayed, is effective and constructive as Jason’s calm but assertive interjections diffuse the situations and cause the tormenters to back off. Graphics offer factual information and interviews with real teens reveal the trauma of being a victim, the relief of the spectator who isn’t the target, and the acknowledgment that bystanders want to intervene, but usually don’t. Poignant photos of Carl Walker Hoover, who committed suicide at age 11, are shown as his sister explains that she had no idea that he had been being bullied. The strength of the program is the honest testimony of the diverse group of teens, the simple strategies for intervening, and a focus on the commonly ignored element in bullying—the bystander. This realistic, well-produced film is a must-see for high school students.

Recommended This DVD opens with scenarios based on real life incidents where bystanders stand up and change the outcome of a situation. There are scenarios of teens who stand up and discuss how intervening can make a difference. Experts explain the difference between being proactive and being in a dangerous situation. Making school a safe and respectful environment is the responsibility of everyone. The teacher’s resource book is thorough and includes reproducible pages as well as stimuli for class discussions and self checklists. In addition, it is chock-full of activities and fact sheets to reiterate the video’s message, and is a valuable tool for teachers using this program. Activities include such items as rating yourself with a pre/post test, checklists, “what would you do if” scenarios, a bullying journal, breaking the bullying cycle, and an action plan against bullying.